We humans are builders. One of the ways we leave a mark on the universe is by creating massive structures that show that some opposable digits have been here. So when things get tough, like due to an economic meltdown or a cascading environmental crisis, what can we do but build?

Here are 10 massive engineering projects — some pretty real, some quite fanciful — that could help turn our economic and environmental crises around. 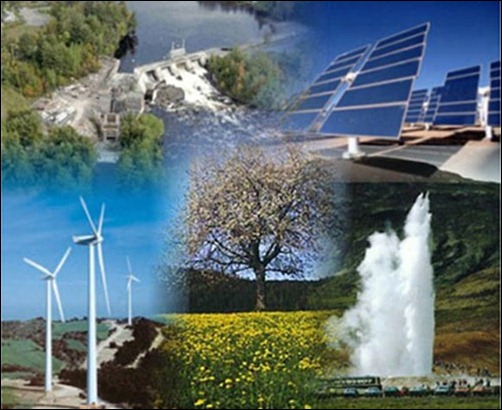 Let’s start with a super obvious one — according to Bloomberg News, 2011 marked the first time that investment in renewable energy was greater than investment in fossil fuels: $187 billion versus $157 billion. The cost of solar energy is dropping rapidly, but even with a loss for the most recent quarter and a trade complaint, the Motley Fool still praised Chinese solar power company Yingli Green Energy as a solid investment. At a time when global investment is down in general, investment in solar and wind power is soaring, and could be the key to reducing CO2 emissions before we reach another point of no return. 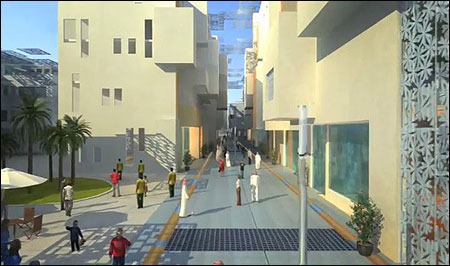 As we wrote back in 2008, Abu Dhabi plans to build the world’s first carbon-neutral city over 10 years, near the Abu Dhabi airport. According to NPR, the city would use shade and Northeast-facing buildings to reduce the need for air conditioning, and cars would be banned within the city limits. Instead, solar-powered vehicles would navigate within the city. And 80 percent of water will be recycled. And all human waste will be “repurposed” and used as energy. Shaikh Zayed, founding father of the United Arab Emirates, describes Masdar City as a way to move past a dependency on oil for the region’s fortunes. 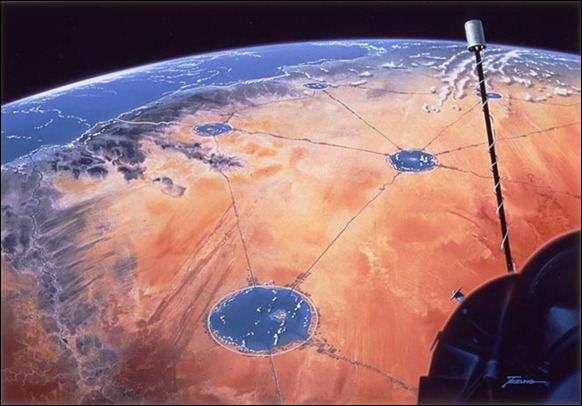 The Shimizu Corporation has proposed to create a matrix of artificial and interconnected seawater lakes in the desert, each with an artificial island in its center for farming and city construction. Theoretically, the lakes would cool the air above each island, making the land arable (after desalination) and the adjacent territory livable for humans. It’s unknown what effects the lakes may have on global weather patterns or, even the potential fallout of the lakes themselves — but first the project would have to get past the biggest hurdle of them all: the question of sovereignty. 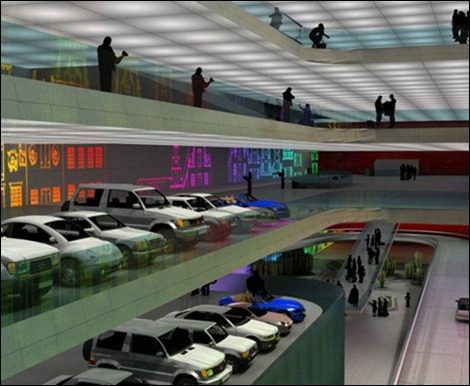 Architect Moshé Zwarts wants to build an underwater city beneath Amsterdam. And Zwarts says it isn’t as ludicrous as it sounds: “It is both feasible and sustainable, creating a city beneath the city is not futuristic, it is a necessity in this day and age.” Zwarts says they could drill under the city without disturbing the existing street traffic or causing any construction noise, once they had resealed the canals overhead. “Amsterdam sits on a 30-metre layer of waterproof clay which will be used together with concrete and sand to make new walls.” And once construction was finished, AMFORA would be carbon-neutral, because heat pumps would provide the energy for heating and cooling, and excess energy would be used for temperature control in buildings aboveground. Some question, though, whether what Amsterdam really needs is more parking and shopping. 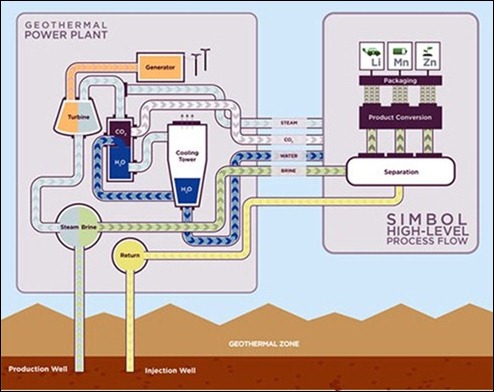 California start-up company Simbol Materials believes they can extract lithium, zinc and manganese from the brine produced by geothermal power plants, potentially producing the world’s purest and lowest costing lithium on the market. As demand for lithium batteries skyrockets, this could be the cleanest and most potentially profitable way to satisfy all that demand. Simbol already has a plant that filters 20 gallons a minute. And a commercial plant, being built in 2012 near the Salton Sea, will have the capacity to generate 16,000 tons of lithium carbonate per year. By 2020, Simbol plans to triple production. 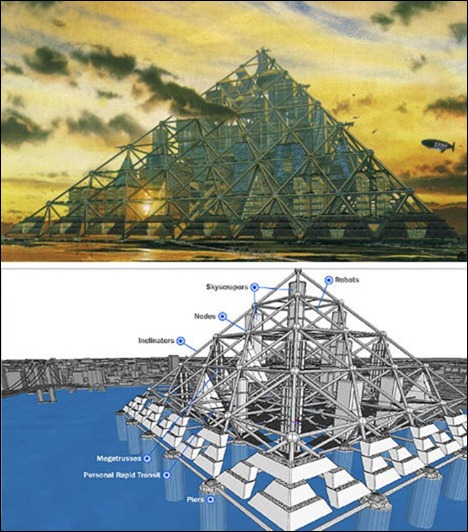 Another absurdly ambitious project from the Shimizu Corporation: a three-mile-long pyramid, 14 times higher than the Great Pyramid of Giza (made from 204 smaller pyramids) capable of housing 750,000 people on Tokyo Bay. Inspired by the Tyrell Corporation in Blade Runner, the lightweight carbon fiber pyramid would boast research facilities, shopping centers, private homes and restaurants. The businesses and residences would be powered by solar power, wind power, and even algae/pond scum. This pyramid is apparently already in development. 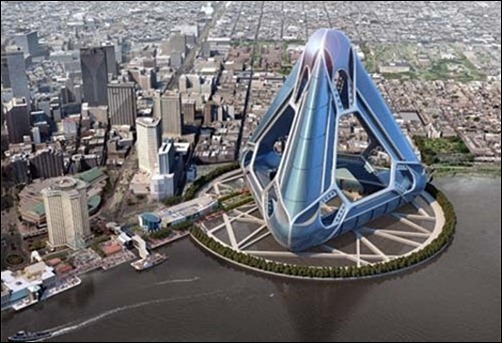 In recent years, cutting-edge design gurus have proposed combining two old trends: the arcology, a self-contained monolithic city, and seasteading. Floating, self-sufficient arcologies have been proposed in places like Boston and San Francisco, but perhaps the most famous is the New Orleans Arcology Habitat, or NOAH. Among other things, the structure is intended to be sustainable, using “secured wind turbines, fresh water recovery and storage systems, passive glazing system, sky garden heating/cooling vents, grey water treatment, solar array banding panels, and river based water turbines.” There would be internal electrical transport systems, both vertical and horizontal, eliminating the need for cars within the structure. 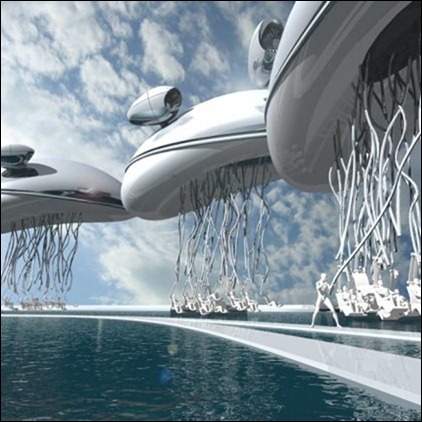 Dr. Rachel Armstrong believes it’s possible to create chemically engineered building materials in the form of synthetic limestone reefs. Created from protocells, fatty bags of DNA that move and react like living organisms, her buildings would grow, self-repair and respond to environmental pressures just as if they were living creatures. Armstrong believes that future architecture should be connected to the natural world, and communicate with nature. If that’s not cool enough, Armstrong’s technology could theoretically save Venice, Italy from sinking by lifting it from the ocean. (Top image: Mitchell Joachim. TERREFORM1: BlimpBumperBus, via Archimorph) 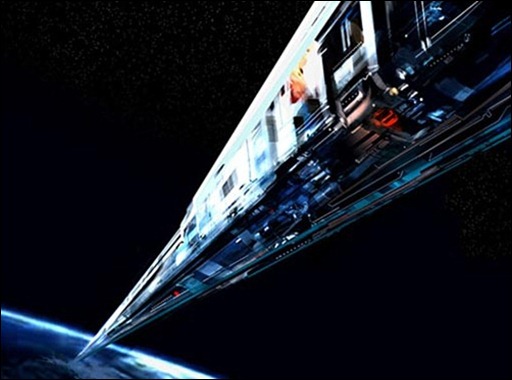 This is probably our best hope for colonizing space — an elevator that could lift tons of material off our planet. As we explained back in February:

Because the space elevator pulls cargo out of our gravity well, rather than pushing it using combustion, it would save a lot of energy and be capable of bringing far more materials offworld quickly. It would also be sustainable, making one or more runs per day. That it’s reusable already makes it many thousands of times cheaper than the one-time-use Soyuz rockets that bring supplies to the International Space Station, only to destroy themselves in Earth’s atmosphere.

A single Space Shuttle launch cost $450 million, but the space elevator could be much cheaper and much more energy-efficient. We attended a conference about space elevators in November, where people were talking seriously about how to make this ambitious project work. 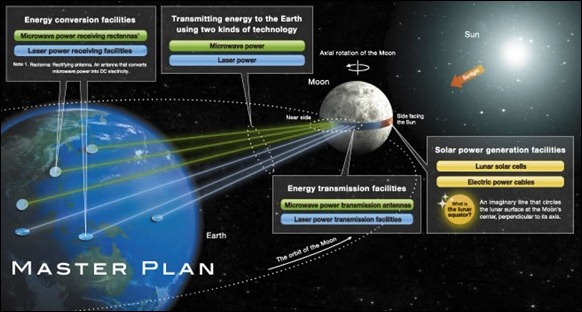 One more cool idea from the Shimizu Corporation. Shimizu’s website describes a “masterplan” to place a belt of solar panels along the moon’s equator, spanning an awesome 11,000 miles in length. A power conversion facility built on the moon (by robots!) would relay stored energy back to Earth through microwaves, later reconverting them to electricity at a power plant on Earth. Though only in the planning
stages, Shimizu’s theoretical ring may ultimately suffer severe degradation from radiation and meteor showers, and technically no one is certain what the effects of such a massive beam of microwaves would have on the environment and wildlife (possibly none), but the idea of a robot-manned lunar ring around the moon would be too cool (and beneficial!) to pass up.

Top 5 Unexplained Mysteries of the Stars
Super Realistic Sculptures
Have You seen Such Art before? :)
Follow Me :)
Follow Me 2
Female beauty standards around the world
Iron Man 3 Pictures
A Beautifull Dream House. Really Awesome
Windows 10 preview and new features
Water Flames Illusion
What is the gender of your computer? Check Now - lol
Celebrities as Funny Celebirdies

10 most expensive Bentley cars in the world